In generally I don't write too many details about the rounds, the needed information is available in the Instuction Booklet on WPC/WSC site. I can't do this now, because we didn't get information in time about this round.
Some years ago in the 13th WPC (2004) there was a similar situation, in one of the team rounds we had to solve some issue of a Slovakian(?) game. Gyorgy said that there was a little debate about this round between the captains. So we tried to avoid this situation.
This round was on the 5th day of the event. On the previous days it was possible to play with some Piatnik's game and buy them. We didn't want to give advantage to some team. (For instance which participanted on the WSC and not just on the WPC.)
The IB of this round isn't available on the offical site, so I uploaded it: IB of WPC Part6

When we visited the Piatnik's exhibitor office we chose some game which seemed to be good for our aims. At least two games cointaned tetro or pento pieces. The Callisto was a bit strange, it cointaned full set trimino, tetromino and just some pento pieces. But the blocus has four full set pentominoes. It seemed a better choice.
I wanted to create a special pentomino puzzle for this round. The story started before the Hungarian Puzzle Championship. I organized a team game, with some linked puzzles. The main puzzle of this game was a pentomino variation.

Pentomino with Tapa clues
Place all twelve different pentominoes into the grid so that they cannot touch each other, and cannot overlap the clues. Number/s in a cell indicate the length of black cell blocks on its neighbouring cells. If there is more than one number in a cell, there must be at least white cell between the black cell blocks.

Two puzzles from this type.

I showed this puzzles to Para who is a big fan of pentominoes. He suggested me to allow the touching at one point, because this fits better in the Tapa rules. I created a puzzle with this rule: 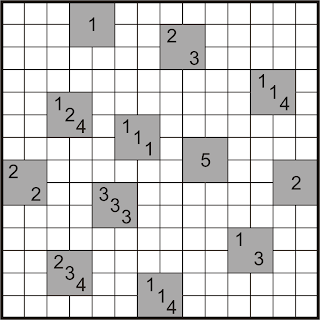 (EDIT: The oroginal puzzle had more solution, I fixed it.)


The end of the story isn't a happy end. The Piatnik finished the selling of Blocus, hence we had to find an other puzzle. So we chose the Callisto.

An unrelated thing: I will publish some puzzles as a small Christmas contest. I'm not sure that I will have enough time on 24th, so I publish the puzzles tomorrow somewhat before 16.00 CET (this means in the next 25 hours :-) )
Posted by Valezius at 14:55