I made two Tents (and two Family Tents) puzzles fro Indian Puzzle Championship. One of them was appeared on the competition.  Here is the other one. It is a bit easier than the competition puzzle. 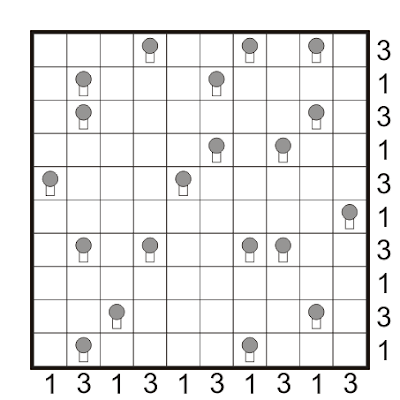 Posted by Valezius at 10:11 No comments:

Email ThisBlogThis!Share to TwitterShare to FacebookShare to Pinterest
Labels: Tents

This is a sudoku for Daily League Sudoku.
This was a new type of WSC2011. It appeared in Part8, which was a bit special.There were 5 sudoku type 2 puzzles from each. One of them contained only signs, in the other one there wasn't any sign. I invented this sudoku genre to piece out the round.
This puzzle is solvable without any given number, but I decided that I would give some extra clues.

Standard Sudoku rules apply. A cell that equals to the sum of two of its diagonally touching
neighbours is marked with a grey right triangle, with its legs facing towards the two neighbours.
Whenever a cell contains two such triangles, the resulting grey square is shown. In this case, it is part
of the puzzle to figure out which are the triangles that made up for that square. All available triangles
(and squares) are given. 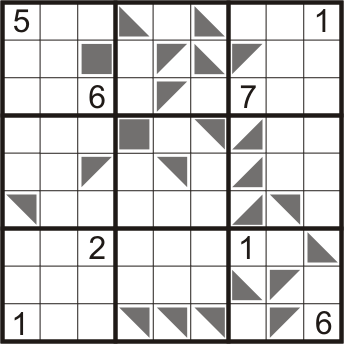